When we started out, we were focused on one day and probably focusing a lot on celebrating people being bilingual, as in English and Spanish. We have grown with the project; all good projects, everyone who works on it grows with it. We are trying to link all children to books, languages, and cultures. I think teachers and librarians have taken that basic concept of linking all children to books, languages, and cultures and they have been incredibly creative in the activities that they use to help young people hear other languages, sometimes other languages in their own community. 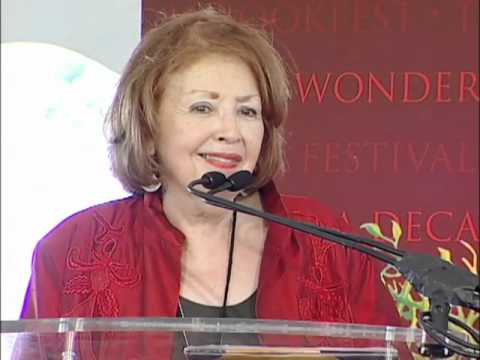 When we started out, we were focused on one day and probably focusing a lot on celebrating people being bilingual, as in English and Spanish. We have grown with the project; all good projects, everyone who works on it grows with it.

It's a way Pat mora honoring home languages. We cannot do enough of that in this Pat mora. But also sometimes it's helping students hear languages they may not hear.

My friends in Kentucky, for example, had people from five different language groups in the community each stand up and read to the kids a little bit in the language of the reader.

And I thought that was a wonderful experience, you know, for young people. So helping them to see that and all cultures are exciting and interesting, all languages are beautiful.

A challenge in the United States remains, sadly, that young people who are not English dominant often feel ashamed of their home language. I think that different libraries and different schools will celebrate in different ways.

One of the things I am very committed to is community control, so that if a community wants to celebrate it on April 15th, that's fine. If they want to have a theme or a logo, that's fine. What we are going to try to do, in terms of my website and what I'm trying to do, is we are going to produce fifteen lists, each will have fifteen tips to help teachers and librarians and parents implement the celebration.

Many times when I'm out speaking, people will say well, "I hadn't heard about it, it sounds like a good idea, tell me what to do. But still what people want to know, because people are so busy, is, "Tell me what to do," and so that's what we are going to try to do. We will have fifteen possible funders, that is, kinds of people for you to think about, everything from your local newspaper to maybe some of the mega-chains who can all contribute in some way.

I want to see young people have a good time, I want to see very diverse families having a good time. But it's more than just the face painting, it's really having literacy focused activities and showing kids, "Gee, literacy is fun! One memory that does come to mind, I think it was last year, that I was in Detroit, a city that has had a lot of problems economically.

And I think it was a part of town that they referred to as Mexican Town. Well, what they created, which by the time I got there, they had grown so large that it was at a park, it was a very low-income community that lived around the park.

People could give out bottles of water, people could give out fliers about their social service agency, there was a puppet show, there was music. But it was like being in another country, in a way, in the sense that people were strolling through the park and they did have strollers, literally, and little ones.

So it was rethinking, how do we put children and literacy at the center of a celebration where families feel, "I belong? I was in Galveston, Texas last year and they had really done a wonderful job.

So that's the kind of thing. And they had sort of a scavenger hunt in the library that was very carefully thought out. It was a way to let new patrons discover, "Gee, there are computers, gee, there are videos" and every part of the library you visited successfully, I think they tied it to Easter.

And so you got something for your little basket, everybody got a free book. And at the end of this glorious event, I e-mailed the organizer and I said "Well, do you think you're going to do this again? And they had been really clever. I told them they were smarter than I was because I would not be able to do the book without holding the book.

It is asking schools and libraries to take a really good look at whether they are reaching all of their service population. Do all the parents, whether they speak English or not, whether they have a nice middle class life or not, feel welcome at the school and by forming a planning committee, that does include parents, some university students, the person in the community who works on summer reading clubs.

Well, if I am a well organized librarian, I might say well, you know, here's my timeline. What a diverse committee requires is that I have to give up some control and as a high control person, I am the first to say that is really difficult.Pat Mora (born in El Paso, Texas, on January 19, ) is a Mexican American, Latina author of poetry, nonfiction and children's books.

She is a graduate of Texas Western College (now University of Texas at El Paso). A popular presenter, she received Honorary Doctorates from North Carolina State University and SUNY Buffalo, and is an Honorary Member of ALA. Pat Mora is a Mexican-American poet and writer who has won numerous awards for her books and poetry.

She holds the Kellogg National Leadership fellowship award, the National Endowment for the Arts. Pat Mora, a leading figure in contemporary Hispanic poetry, was born on January 19, in El Paso, Texas. She received a BA from Texas Western College in .

Pat Mora, born in El Paso, Texas, is an award-winning poet and author of books for adults, teens, and children.

Her awards include a Poetry Fellowship from the National Endowment for the Arts, a Golden Kite Award, American Library Association Notable More about Pat Mora.